Moderated by Stephen Mallon, artist Manjari Sharma and Ariel Shanberg, (Executive Director of the Woodstock Center of Photography) discuss portfolio reviews on how to get as much out of the review circuit as possible. This is not a common sense discussion, this is a talk from both sides of the table about how much business gets done at the bar and at the event vs your actual review. What’s the biggest thing you learned from a review? What’s the worst promo you’ve seen? What about follow ups? How long does an artist need to wait before reaching out again?


While these seminars do not require advanced signup, seating is first come first serve so we highly recommend that you reserve your spot in advance!

This presentation will take place in the Photoville Talk Area – located at the storefront of One Brooklyn Bridge Park at corner of Joralemon Street & Furman Street.

Manjari Sharma is a photographer whose work explores personal mythology, representation, and experience. Manjari was born and raised in Mumbai, India and is based in Brooklyn. Her work has been featured in publications including Los Angeles Times, New York Times Blog, Monocle, Life, CNN, and Wired, amongst others. Her work has been exhibited in solo and group shows in New York, Los Angeles and Spain, amongst others. Manjari was awarded The CENTER’s Curator’s Choice Award 2014 and her work was selected as honorable mention for the Santa Fe Prize in 2012. She is represented by ClampArt, New York and Richard Levy Gallery, New Mexico.

Ariel Shanberg is executive director of Center of Photography at Woodstock, having originally joined the company in 1999. He has curated many exhibitions at CPW, as well as at other venues including Light Factory, and the Philadelphia Photo Arts Center. Shanberg served as a panelist for the New York Photo Festival Awards, the National Endowment for the Arts and Media Alliance’s Media Action Grant, amongst others, and a reviewer at regional & national SPE conferences, FotoFest, Portfolio Review Russia, and Rhubarb Rhubarb. He has contributed essays for various publications, including Aspect: The Chronicle for New Media Art, Contact Sheet, European Photography, and Exposure.

Stephen Mallon is a photographer whose work focuses on construction sites, machinery and engineering. He has been commissioned by and his work featured online and in print for numerous outlets, including New York Magazine, Wired, GQ, Feature Shoot, PDN, The New York Times Magazine, The Wall Street Journal, and Fortune, amongst others. His work has been exhibited widely, including during several photo festivals. Mallon’s work has been honored by Communication Arts, Photo District News, the New York Photo Festival, the Lucie Awards, Woodstock Film Festival, Look 3 Festival and the Bristol Biennial. Stephen is represented by Front Room Gallery in Brooklyn, NY. 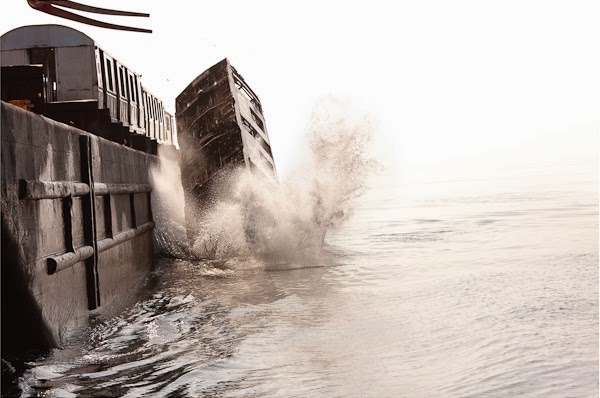 The Waterfront Museum is pleased to present Land In Sea, featuring select large scale photographs by artist Stephen Mallon. The show's focus is work from Mallon's two powerful series "Brace for Impact" and "American Reclamation". "Brace for Impact: The Salvage of Flight 1549" features Mallon's sizeable photographs documenting the recovery by maritime contractor Weeks Marine of Flight 1549, the plane piloted by Sully Sullenberger III who successfully emergency-landed in the Hudson River on January 15, 2009 after a collision with a flock of geese resulted in both engines failing and saving all 155 people aboard. The other is “American Reclamation: Next Stop Atlantic”. NYC's MTA joined the artificial reef-building program off the east coast of the U.S. in 2000. Mallon documents the progress of the train cars on their destination out to sea from 2008 to 2011.

The Waterfront Museum was founded in 1986 to provide programs in education and culture aboard an historic vessel and advocate for and expand public waterfront access in a NY Metropolitan area. The museum relocated to Red Hook, Brooklyn in 1994 as a permanent homeport after operating in Liberty State Park in Jersey City & Hoboken, NJ; Piermont, NY; South Street Seaport, NYC. The museum's permanent collection includes a nearly one-century old wooden barge, listed on the National Register of Historic Places.


Directions to the Waterfont Museum.