An article about "Behind the Curtain" by Stacey Baker, who also produced the video, has been posted. Check it out here!

Scenes From Two Days at the Metropolitan Opera

Through the lens of symbolism and ritual, Sea Drift, a group exhibition featuring the work of seven Brooklyn-based artists, presents a meeting of mythic ideas and contemporary realities regarding the waters surrounding Brooklyn. 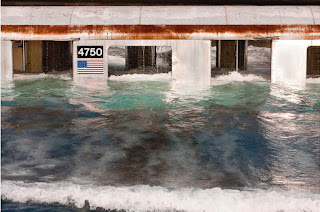 
Screening of Marie Lorenz’s “Sequence 14” from her Archipelago series


The participating artists in Sea Drift bring a range of practices and approaches, both traditional and contemporary to the exhibition. The common themes of journey, memorial, salvaging, remembrance and transformation are apparent among them, shaping their work and their understanding of water. Sea Drift shows a potential for artistic expression to ebb and flow, to drift between the real and symbolic.


The pull of the tides, the lure of the sea, and the mystery and power of oceans and rivers has through time manifested in a rich body of folklore, symbolism and ceremony. Water is necessary for human life, and due to this obvious importance, water has taken on considerable symbolic value in communities both religious and secular. Much of this is depicted in rites and rituals, collections, journeys and performances, which portray ideas of water beyond the literal.


Water as an everyday aspect of Brooklyn's landscape has been, and continues to be, in flux. Formerly crucial maritime uses have mostly disappeared, and waterfront access is now commoditized, a perk for those moving into newly residential areas. But in fact our relationship to the shoreline is not solely one of ownership, but of understanding, interaction, and respect for this unique place.


Three of the artists show documentation of traditional cultural expressions concerning water. Ocean Morisset’s photographs of the 23rd annual Tribute to the Ancestors of the Middle Passage document a ceremony that memorializes the thousands of African slaves who died in the Atlantic passage to America. Every year hundreds of Brooklynites come to the shore of Coney Island to send flowers and prayers in remembrance. Their ritual actions transform the same location of Larry Racioppo’s photos of mermaid parade revelry into a healing place of offering. Racioppo also has regularly documented and participated in Italian Williamsburg’s annual Roman Catholic Feast of St. Paulinus and Our Lady of Mt. Carmel, popularly called the Giglio Festival. The centerpiece of the festival, performed in Brooklyn for over 100 years, is an enactment of St. Paulinus’ miracle story, from Nola in southern Italy. It tells of the Saint’s journey by sea to rescue boys captured by pirates. In its yearly re-enactment, the parading of a 65' tall tower called the gigli (lily), and la barca (boat), are separately carried on over one hundred men’s shoulders. The tower represents the lilies thrown at the Saint’s feet upon his triumphal return with the boys and it is the boat's symbolic role to help actualize this narrative of miraculous recovery on the streets of Brooklyn.


A journey is also presented in Angela Jimenez’s photographs of Crete, George Kortsolakis’ homage to his homeland, from which he emigrated in 1955. By the side of his house, Kortsolakis began his miniature recreation of Crete in 2002. This work of memory-based folk art is devotional in its obsessive detailing, figuratively drifting Kortsolakis from Bay Ridge to the blue waters of the Mediterranean Sea.


Randy Duchaine has documented both working and playing aspects of the New York harbor, including tugboat races, the Polar Bear Club meetings, and competitive swimming. These group interactions with the water can be seen as culturally-created secular rituals.


Unlike the activities shown in Duchaine’s images, transformation can develop from solitary and fairly passive expeditions and interactions with the water. Marie Lorenz builds wooden boats, taking them out on weekly journeys to the uninhabited islands and coasts of Brooklyn and Queens. Once there, she begins her ritual of collection, learning about the environment through direct interaction with what the tides have brought that day. Lorenz’s art emerges from a personal transformation, which develops into her own modern ritual. Willis Elkins works in a similar fashion. His collection of nurdles, “mermaid’s tears,” look like sand, or perhaps beach glass, but instead they are raw plastic, a new reality of detritus on Brooklyn’s waterfront. The nurdles’ journey to our shores is impossible to know, yet we are confronted with the environmental repercussions.


Is there ritual in this depository role our waters have taken? A form of urban labor that takes on the feel of dystopian ritual is seen in Stephen Mallon’s series Next Stop Atlantic. The creation of artificial reefs is a practice dating back to the 1600s, and is currently in process along the Eastern Seaboard, with over 2,500 subway cars sunk offshore. Seeing the subway cars, something so iconic and crucial to millions of New Yorkers’ daily lives, splash into their watery grave is deeply disorienting. But it reminds us that the bodies of water surrounding us are much greater, much deeper, and more powerful than we usually understand.

Sea Drift is presented in conjunction with HarborLore: Where the River Meets the Sea in Brooklyn’s Folk Imagination, an exciting festival that will celebrate the role of water in the songs, stories, dances, and other artistic traditions of Brooklyn’s diverse communities. From Caribbean Garifuna fishing stories to Bangladeshi water vessel dances, HarborLore will showcase a wide range of cultural traditions carried on by Brooklynites from around the globe.