Each year, the Staten Island Ferry brings runners from all over the world to Staten Island for the start of the New York City Marathon.
22,000 runners took the ferry in 2011 in what John Garvey, the Director of Ferry Operations, called the "largest rush hour we have for the year."
Participants in the marathon come from all walks of life, but on that day they're all runners, as seen in this compelling short documentary of their voyage across New York Harbor.

"On Jan. 15, 2009, a few Canadian geese with bad timing became snarge, a steely pilot became a hero, and the world became fascinated with images of a jet splashing into the Hudson River and then floating calmly as passengers crowded it's wings.
But until now, few people have seen the equally surprising pictures of the second half of the story; when a salvage team used the biggest floating crane on the East Aoast to puck the ill-fated Airbus A320 from the frigid water."
-Matthew Shechmeister, Wired Magazine 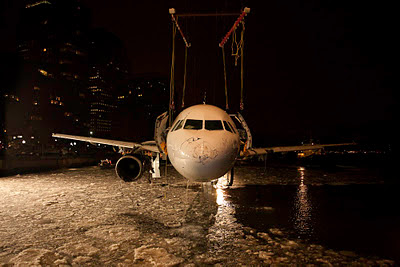 It is very difficult to encapsulate the events that happened during and following te crash of flight 1549, but Stephen Mallon's large-scale photographs, taken during the salvage of the fuselage and engine, impart on a physicality and scale to these incomprehensible occurrences. Mallon's photos present us with the aftermath of this disaster and remind us how it was overted despite nearly unbeatable odds through the mastery and bravery of the pilot and crew. 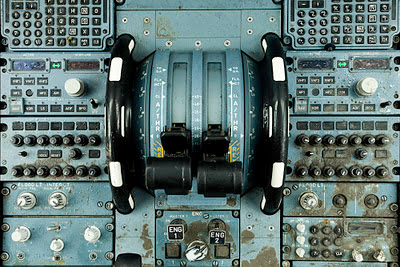 Never before has a commercial aircraft crashed in the Hudson River with the complete survival of all  passengers and crew. Rescuers included the crews of the Half Circle Line tour boats, and a Staten Island Ferry support vessel, as well as boats from the New York Waterway. Men, Women, and children waited their turns patiently standing on the wings of the plane, half-submerged in the icy water on what felt like the coldest day of the year. This feat is a testament to the bravery of the crew, passengers and rescuers. 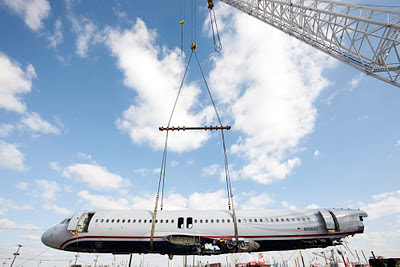 As the fuselage and engine of the aircraft were later brought up intact by a gigantic crane and a team of divers in heated wetsuits, Stephen Mallon captured the moment standing on the deck of the crane-barge. In Mallon's uncanny photographs the plane sometimes appears to be a metaphorical wounded animal, like a whale lifted completely out of the water. It is damaged, beat up, and missing one of it's engines, but it nevertheless survives. The divers, in their heated wetsuits and huge face-gear, seem like astronauts floating through an icy void in space. And, we finaly get a glimpse of the famous engines disabled by some unfortunate Canadian geese in a stunning pseudo-portrait by Stephen Mallon as it is lifted from some eighty feet of icy water. 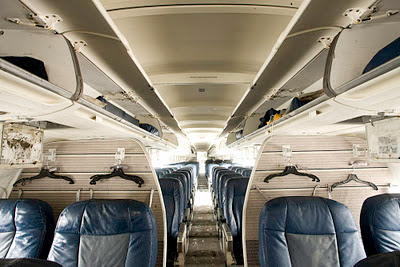 Weather it was seeing the video on the local news, or hearing a broadcast on the morning radio show, the feeling of shock and disbelief saturated our emotions as we tried to wrap our minds around the scale of this disaster. What boggled our minds even more was the caliber of the pilot's flight skills, his ability to remain calm in the worst case scenario, and finally utilize all of his resources to save the lives of all of his passengers and crew. It is safe to say that everyone who heard the story of flight 1549 was amazed by the unbelievable events of the cold January day. 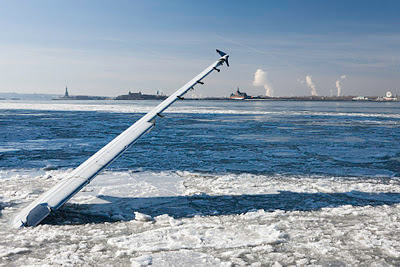 Time moves on and memories fade. Three years later, it is difficult for one to recall the moment when he heard the news of a plane landing in the Hudson River. It is easy to forget how one felt upon hearing the news os a plane landing in the Hudson River just a few years ago. However, Stephen Mallon's photos facilitate the recollection of faded memories and emotions. The feelings of shock, awe, disbelief, and amazement come rushing back when seeing a wing of an airplane protruding from the icy water. 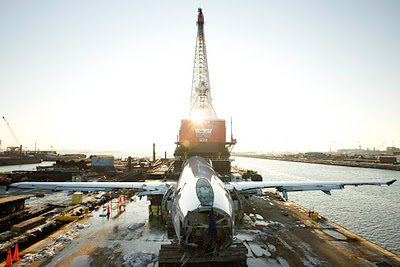 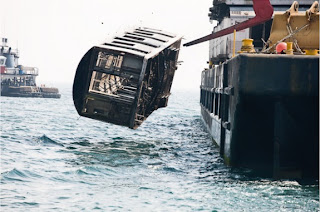 Making the rounds this morning is a fascinating article on New York City’s ghost subway system, comprising dozens of partially built or fully built but never used tunnels and platforms interwoven among and between the city’s currently bustling tracks and stops. Mainly originating from the 1920s and ’30s, these forgotten subterranean spaces represent the thwarted ambitions of city planners who once envisioned an expansive, interconnected future for every neighborhood in New York—until the fiscal repercussions and socio-political re-prioritizations of the Great Depression and World War II changed everything.

Reading all this brought to mind Stephen Mallon’s stunning 2010 photographs of the MTA’s ongoing “loadouts” and “drops” of retired subway cars into the Atlantic Ocean for the dual purposes of disposal and reef building. Coming to rest deep in the waters off the Maryland coast, the skeletal remains of obsolete trains circumscribe a virtual space of the sub-marine variety, existing as yet another invisible incarnation of the New York subway system’s many lives. 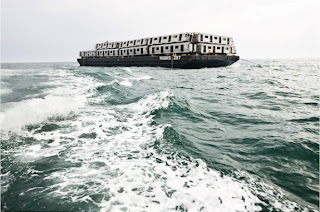