Stephen Mallon On Perseverance And Transition To Video

Over 5 years ago aPhotoEditor wrote a small story on Stephen Mallon’s images of the salvage of Flight 1549.
The backstory.
Prior to the incident on the Hudson River, Stephen Mallon was “surviving” on royalties from multiple stock agencies. He had been photographing landscapes for licensing and exhibition, and personal work. A book editor at a portfolio review had expressed interest in making a book but Stephen felt he didnʼt have the right content that he envisioned for his first monograph. So he set about focusing on his interests in the recycling industry. He engaged a writer to help with a proposal, and, explaining that he intended to make images for non-commercial use, he gained access for two days to a recycling plant in New Jersey, which led to access to others in other states and to a body of work that would come to be titled “American Reclamation.” This was all self-funded by the bits and pieces he was drawing in from editorial and resale.
The break.
In New Jersey, in 2008, Stephen spotted a barge loaded full of stripped down subway cars and thus discovered the artificial reef project, wherein these erstwhile MTA cars are shipped to various locations off the US coast and dumped in the ocean to create artificial reefs both for sea-life and for tourism, images of which would become “Next Stop Atlantic.” The company concerned was Weeks Marine, and here began a wonderful relationship. Forward to 2009 and Stephen and his wife are out celebrating her birthday when Chesley Burnett “Sully” Sullenberger, III, makes his amazing landing on the freezing Hudson River. Mallon called Weeks Marine and sure enough they were tasked with retrieving the plane; they commissioned Stephen to photograph the project, bringing him in by tug boat to make an incredible photo essay that made national news. As well as all the licensing, the prints are still selling well in the fine art market. 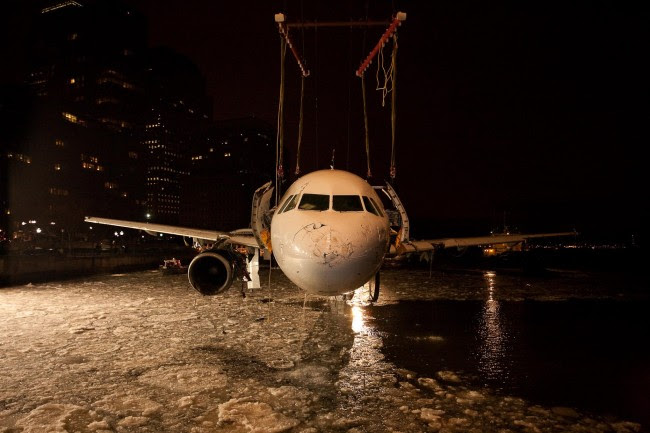 Stephen says although he had his body of work of industrial landscapes he didnʼt have a solid assignment piece that he felt was both beautiful and relevant to fine art and for editorial. He says it took real effort to keep the momentum going so he wasnʼt “just a flash in the pan.” It was at another portfolio review that Stephen met Front Room Gallery, based in Williamsburg, Brooklyn. They offered him a solo show of Flight 1549, and also sold a few prints from “American Reclamation” which led to the suggestion of a solo show of that series, too, in 2010. Now some assignment work began to trickle in, including a trip to Brazil to shoot Petrobas for Fortune Magazine.
“All this time, the 5D Mark II is on the market, and people are talking about video. I equated it a lot to when clients began to ask for digital,” he says. For a while, people would still hire Stephen even when he said “no” to the question of whether he was capturing video, but he knew the time was coming when heʼd need to be able to say “yes.” Heʼd made a “bad” time-lapse around 2008, and only tinkered with the style since. In 2011 Weeks Marine called to say they were delivering a bridge by barge in New York, and was he interested in covering it? Stephen saw the perfect time-lapse project. He scouted the whole route, setting up cameras along the way, in the yard, and on the barge. The film was submitted to festivals, picked up by the Wall Street Journal, and got a lot of attention online. Stephen feels this was the catalyst for his time-lapse future.

The next big step was winning a contract to work for the City of New Yorkʼs Department of Transport – he produced a wonderful time-lapse for the Citibike program.

“I had been dropping my portfolio off at the New York Times pretty much my entire career – 10, maybe 15 years!” says Stephen, when eventually they saw some of his time-lapse work online, and wanted to meet. They loved what he was doing: “Kathy Ryan tried to hire me a couple of times but security at the locations we wanted to shoot in kept on stopping the projects from moving forward.” It wasnʼt until 2013 that she found the right assignment for him: to make a time-lapse over two days and two nights of set changes at the Metropolitan Opera. This video went on to win the Communication Arts photo annual award, and was accepted for the PDN photo annual.

The cost of video production.“Day rates are pretty much the same for video as for stills – the photographerʼs fee hasnʼt gone up, but Iʼm shooting with seven cameras at a time, I need assistants to set up and monitor them, then thereʼs the cost of post, the editor, and audio licensing. I am busier than I ever have been, itʼs phenomenal, but no, Iʼm not making tons of money. When the budget is there, we put in enough post which covers color correction and rendering. The editorʼs fee is a separate line item, accounting for all the video editing and a couple of revisions. Weʼre always buying hard drives – a terabyte a month! Someone has to pay because we are archiving all these jobs.”
Mallon has been buying camera bodies, one job at a time: he has five digital SLRs and two GoPros so he doesnʼt always need to rent although he does say he could always use one more camera. He is more comfortable shooting live video capture now, and enjoying mixing time-lapse and video in the same piece (he has just finished another job for the DOT, made over 18 months, that mixes time-lapse and regular footage.)
Skills for the future.
“Editing video, the whole aspect of sequence, timing, speed, music, it was a whole new experience for me.” Now heʼs so much more familiar with it all, heʼd like to get a bit more long-form documentary work and is meeting with TV production companies. Heʼs enjoying video but also continues to love shooting stills: “It reminds me how much easier it is to make a photograph than it is to shoot video” he says, laughing.
  
So far this year Stephen is most proud of a piece made for New Yorkʼs Armory exhibition hall, the result of two years keeping in touch with an ad agency which eventually recommended Mallon to time-lapse the setting up of The Armory Show.
Looking to the future, he believes interactivity is going to be key. In a job heʼs working on now, a public awareness campaign about crossing the road, the conversation turned to how to make a video motion-sensitive, to turn it into an interactive smart-board. He believes he will need to be able to deliver multimedia components, potentially build apps for his clients, teaming up with tech and design professionals.
Stephen Mallon has a solo show this fall 2014 at the Waterfront Museum and a solo show at NYU in early 2015. You can view his work here: stephenmallon.com
No comments: