Auctions  are a nice way to help out,  you dontate a print, people get a chance to purchase your work and support a cause, and you get that nice warm fuzzy feeling that you did something nice.

the auctions close at different times and benefit different organizations - check them all out!

manjari sharma, and more friends are in
The Young Photographer's  Association auction is here

this ap from next stop atlantic is at the  aperture auction 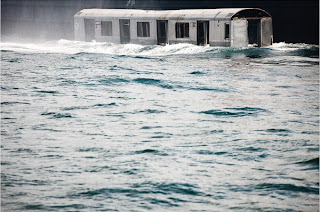 Coalition for the Homeless at Artwalk-
camera works here
vanderbuilt foundation- little bit different then an auction but still good to be at!
No comments:

The show was extended until oct 10th and we are going to celebrate the end of the exhibition at Front Room Gallery    This friday night Oct 8th  from 7-9.

Here is the latest review of the show in the Brooklyn Rail-  I am pretty flattered with who they are also talking about in this article! 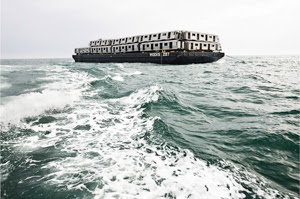 “Weeks 297” (2010). Digital C-Print. Courtesy of Front Room Gallery.
Imagine you’re riding the subway while reading this. Do you know where the subway car you are riding may eventually end up? On the bottom of the Atlantic. Over the last nine years the N.Y.C.Transit Authority has worked with the national artificial reef building program to sink around 1,800 subway cars. Beginning in 2007, Brooklyn-based photographer Stephen Mallon embedded himself with the maritime company in charge of the dumping operation. Since then he’s photographed four “drops” and two “load-outs.” His solo exhibition, Next Stop Atlantic, draws from these six outings, charting the progress of the trains as they are stripped bare, loaded on barges, and pushed into the ocean.

Mallon is a self-proclaimed “industrial photographer” whose work skirts the fringe between photojournalism and fine art, with context often being the determining factor. His choice of subject matter and his project-oriented practice make Mallon an heir to the long photographic tradition of recording industrial activity. What sets him apart from peers like Edward Burtynsky, Thomas Struth, or Robert Polidori, is Mallon’s preference for the digital camera over the antiquated and cumbersome large-format view camera. This sacrifices optical clarity and chromatic saturation for speed and versatility. A view camera requires a tripod and stillness. It simply isn’t what you want out on a boat with ocean waves chopping against the hull.

For most of us in N.Y.C. the silvery Brightline subway cars that have serviced commuters since the 1960s are emblematic of urban transportation. To see them stripped bare—no windows, doors, seats, even the oily undercarriage and steel wheels are gone—hauled out into the ocean, and dumped overboard is pure surrealism. There’s also more than a tinge of irony in the notion that these icons of the city and of movement are ultimately reclaimed by nature as new homes for crustaceans. “Virginia Placement” (2010). Digital C-print. Courtesy of Front Room Gallery.
Two features in Mallon’s Next Stop Atlantic are immediately striking: there are no people in the images, and the subway cars retain their old working insignias. The absence of people enhances the sense that these exoskeletons are abandoned. The fact that the cars go into the ocean with their MTA logos, American flags, and fleet numbers still attached enables viewers to distinguish one hulking metal shell from the next. Consequently, the cars retain a degree of their individual identity despite having their bodies stripped to a uniform starkness.
Mallon’s best work is done out on the ocean where the quick speeds of his digital camera are fully utilized. In “Virginia Placement” the visual tension is as tight and decisive as any moment frozen by Henri Cartier-Bresson. The subway car has been pushed off the barge and is caught in a mid-air spin, sunlight glistening off the metal exterior, dappling—for the last time—its torn-out insides. In the distance is the infinity of the ocean’s horizon. It’s the kind of photograph you feel in your spine, possibly because it makes visual the chilling reality of life’s final transition, like the first shovel full of dirt on a closed coffin lid.
The foundation of Next Stop Atlantic is the larger theme of recycling, which ties Mallon’s project to numerous current trends in contemporary art. Transforming yesteryear’s cultural modalities into something topical, timely, and altogether functionally different is definitely in vogue. (Consider the Bruce High Quality Foundation’s Whitney Biennial contribution, a revamped Cadillac hearse with a resuscitated title, “We Like America and America Likes Us.”) Mallon may not have transformed anything himself, but he recognized the artistic potential of what Weeks Marine—the largest provider of dredging services in the U.S.—was doing. For artists who operate in the realm of photojournalism, (e.g. Nina Berman, Lorraine O’Grady: both 2010 Whitney Biennial selections) this is a textbook project.
No comments: