next stop atlantic on The Heavy Light 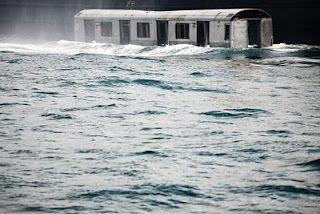 DA: Let’s talk about the subway shoot. How did you learn about the fact that old subway cars were being dumped in the ocean?


SM: I’d first read about it in the New York Times in maybe 2004 and I thought that project was all finished. But in April 2008 I spotted a barge loaded with subway cars while location scouting in New Jersey. I drove to adjoining yard which belonged to Weeks Marine, the company that turned out to be the owner of the barge. I talked to the security guard and told him that I was interested in photographing the barge. The guard passed me on to Lou, the yard manager, and Lou passed me on to Jason, the senior engineer. I told Jason about my ongoing photo project about recycling “American Reclamation”, and gave him my website. He was himself interested in photography and liked my work, and after I secured permission to photograph from the MTA (Metropolitan Transit Authority) he gave me full access to the “loadout”.

When the loadout came I drove to the 207th Street rail yard in the Bronx where the old stripped down subway cars were loaded onto Barge 297. It took about 2 days to load the barge with as many cars as possible. Then the barge shipped back to Bayonne, NJ where it sat for a few days. I wasn’t allowed on the loaded barge for safety reasons. I was also not allowed to stand under subway cars for safety reasons, but I only found that out later.

DA: Tell me how this personal project has influenced your career so far.

SM: The subway project was what introduced me to Weeks Marine, so when the plane went down in the Hudson, I called Tom Weeks to see if they would do the salvaging. When they got the job, Tom asked me if I wanted to work. I had to get permission from National Transportation Safety Board and after that got full access to the proceedings. I had been staying in touch with Front Room Gallery for about 3 years, showing them my work and going to openings, so when they saw my series “Brace For Impact: the aftermath of flight 1549″ they decided to give me a solo show.

That work also got a Lucie Award and led to a commercial assignment for Maytag, which turned out to be the biggest job of my career so far.

Stephen Mallon‘s show “Next Stop Atlantic” will open at The Front Room Gallery in Williamsburg, Brooklyn on September 10th.