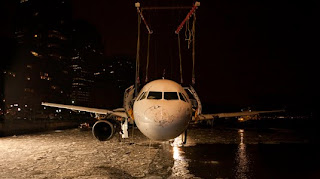 Stephen Mallon Photo Exhibition Documents Flight 1549's Recovery from the Hudson River print version 'Brace For Impact: The Aftermath of Flight 1549' runs through August at the University of the Arts

On January 15, 2009, the world became fascinated with the story of a U. S. Airways jet that splashed down into the Hudson River in New York City and then floated along calmly as passengers crowded its wings for rescue. Soon afterward, a salvage team used the East Coast's largest floating crane to extricate Flight 1549's fuselage and engine from the nearly frozen water. 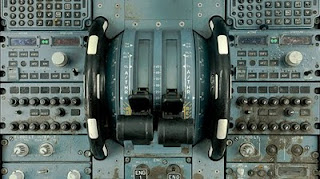 Industrial photographer Stephen Mallon documented this process and reveals it to the world in the exhibition "Brace for Impact: The Aftermath of Flight 1549" at the Sol Mednick Gallery at the University of the Arts May 28 through August 7. Mallon's large-scale photographs impart a physicality and scale to these incomprehensible occurrences. The images present the viewer with the aftermath of this disaster, reminding them how it was averted despite nearly unbeatable odds through the mastery and bravery of the pilot and crew.

Mallon found his calling in industrial photography. He has been fascinated by industry since his teenage years and his photographs convey his sense of wonder at the engineering of concrete and steel.. His commercial clients have included Publicis and Sudler & Hennessey. Mallon, whose photos have been honored by Communication Arts, the New York Photo Festival and the Lucie Awards, is also a leader in the photo community. Since 2002, he has been a board member of the New York chapter of the American Society of Media Photographers and served as president from 2006 to 2009. He lives in New York with his wife and their daughter.

This exhibition is concurrent with Barbara Yoshida's "Megaliths/Night/Sky" in Gallery 1401 (the Sol Mednick Gallery’s sister space).

The Sol Mednick Gallery, located on the 15th floor of Terra Hall (211 S. Broad St.) in the Media Arts department, offers a regular schedule of exhibitions of contemporary photography. The only endowed gallery in Philadelphia dedicated solely to the exhibition of photography, the gallery earned the Photo Review Award for service to photography and celebrated its 30th anniversary in 2009. Associate Professor of Media Arts Harris Fogel has been the director of both galleries since 1997. Summer gallery hours are Monday through Friday, 10 a. m. – 5 p. m.; weekend hours by appointment. Call 215-717-6300 for further information.